Zamalek have terminated the contract of French coach Patrice Carteron ‘amicably’ after the team suffered a four-match winless run in all competitions, the club’s chairman Mortada Mansour announced on Monday. 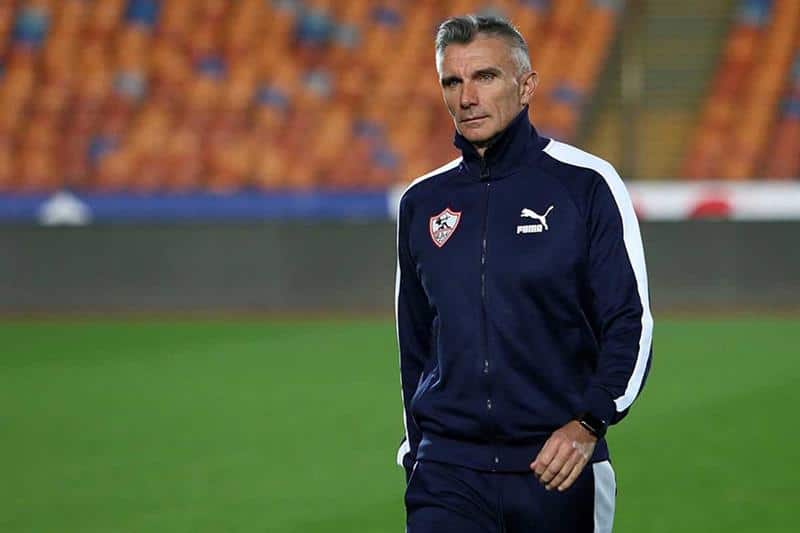 “We agreed with Carteron to terminate his contract with team amicably and he will be paid only one month as a compensation without any filing of complaints with FIFA,” Mansour said in video posted on his social media accounts on Monday.

“We thank him for the time he spent with team and hope him a well future with any team he will join,” the Zamalek’s chairman added.

On Monday, Zamalek’s outspoken chairman Mortada Mansour held a meeting with Carteron at the club’s headquarters, emerging to announce the termination of the French tactician’s hefty contract – and the lowering of his compensation package – in an end to his second stint with the White Knights.

In late 2020, during a previous tenure of Mansour, Carteron, then head coach for 10 months, suddenly terminated his contract with Zamalek shortly before a crucial Champions League semi-final clash.

However, the 51-year old tactician, a two-time African Champions league winner with DR Congo’s Mazembe and former Mali head coach, returned to the White Knights a few months later, steering the team to their first Egyptian Premier League title since the 2015 season.

Zamalek are struggling in the CAF Champions League group stage as they collected only two points from three games, four behind second-placed Wydad and five adrift of leaders Petro Atletico of Angola.

The five-time African Champions, need a miracle to go through in the CAF Champions League as they need to win their remaining three matches in Group D.

On Saturday, the team threw away an early lead to slump to a 3-1 defeat at Morocco’s Wydad, which dented their hopes of reaching the African Champions League quarters.

Mortada, 69, had some harsh words on Sunday for Carteron, accusing him of negotiating a move away from the club and saying he would be questioned by the board.

Zamalek are preparing to face Future FC in the postponed game from the 10th matchday of the Egyptian Premier League on Wednesday.

Zamalek look disjointed and the appointment of Osama Nabih as assistant coach on Sunday is unlikely to spark a revival on its own.

Nabih, an ex-Zamalek striker, was an assistant to Hector Cuper when the Argentinean was in charge of the Egyptian national team from 2015-18.

“I met today with chairman Mortada Mansour. We will do our best to rectify the team’s course in the coming period,” Nabih, 47, said after his appointment.

Cuper, 66, who is gearing up for a World Cup qualifying playoff against Morocco as the DR Congo head coach, is mooted as one possible replacement for Carteron.