Mohamed Salah scored and provided a superb assist as Egypt came from behind to beat North African rivals Morocco 2-1 after extra time and reach the African Cup of Nation semi-final on Sunday.

Egypt gave away a clumsy penalty early on, which Sofiane Boufal dispatched to put Morocco ahead, but the Pharaohs roared back in style as Salah inspired a comeback to keep the team’s hopes of a record-extending eighth crown alive. 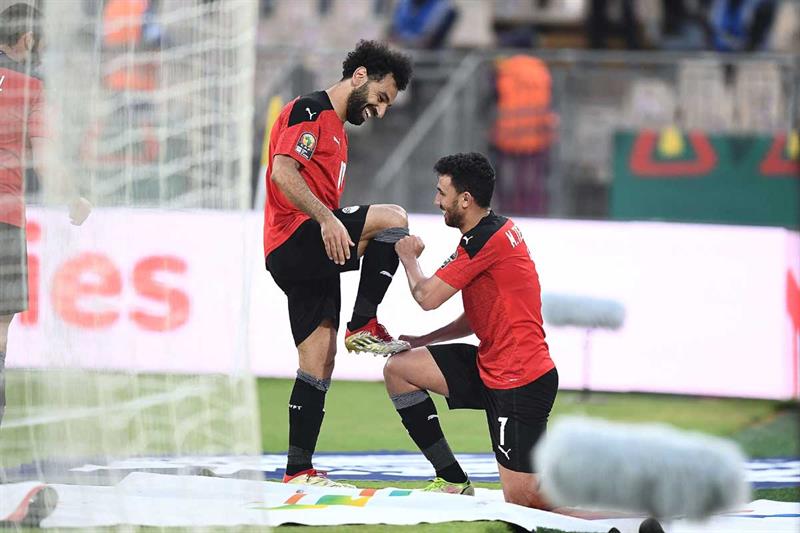 The Liverpool talisman fired home on the rebound after Morocco keeper Yassine Bounou parried a header into his path eight minutes into the second half before setting up substitute Mahmoud Trezeguet for a precious winner in the 100th minute.

Egypt set up a semi-final meeting against hosts Cameroon on Thursday, five years after they clashed in the final of the 2017 edition, which the Indomitable Lions won 2-1.

They also seem to be getting over an abysmal record against Morocco, having eliminated the Atlas Lions at the last-eight stage for the second time in five years after also defeating them 1-0 in 2017.

Egypt also made light of another stroke of bad luck, having lost key central defender Ahmed Hegazi in the second half before stand-in goalkeeper Mohamed Abou-Gabal, who was the hero of the round-of-16 shootout victory over Cote d’Ivoire after replacing Mohamed El-Shennawi, was substituted after hurting a groin muscle.

Coach Carlos Queiroz’s decision to include four goalkeepers in his squad, which was questioned by many pundits before the tournament, appeared vindicated as third-choice goalie Mohamed Sobhi came on with the Portuguese not worried over the prospect of fielding an outfield player in goal.

Egypt were taken aback when natural defender Ayman Ashraf, who was introduced as part of a three-man midfield following the injury of Ahly teammate Hamdi Fathi, made a rash tackle to foul lively wing-back Achraf Hakimi in the area, with the referee awarding a penalty following a VAR review.

Boufal, who produced an impressive display in Morocco’s 2-1 comeback win over Malawi in the round of 16, sent Abou-Gabal the wrong way after six minutes to silence Egypt’s enthusiastic crowd at the Ahmadou Ahidjo stadium in Yaounde.

But the goal failed to take the wind out of Egypt’s sails as they poured forward while remaining compact at the back to nullify any threats.

Two shots from Ashraf and impressive left-back Ahmed Fattouh stung the palm of Morocco keeper Yassine Bounou as Morocco were pegged back for large spells in the first half.

Egypt deservedly levelled the score on 53 minutes when rookie defender Mohamed Abdel-Moneim, who proved one of the team’s standout performers at the Nations Cup so far, stooped to meet a swerving corner with a header that Bounou kept out by a one-handed save, but Salah was on hand to tuck away the rebound for his second goal of the tournament.

Both sides then traded punches but Morocco notably improved as the game wore on and could have snatched a winner with nine minutes remaining had it not been for a superb save from Abou-Gabal.

The Zamalek shot-stopper pushed a goal-bound header from defender Naif Aguerd onto the underside of the bar following a floated cross but looked in pain after landing on legs.

After a brief treatment, Abou-Gabal refused to be taken off in a bizarre scene as Sobhi warmed up. He was allowed to carry on but was eventually substituted five minutes into the first half of extra time.

A well-worked move saw Egypt go ahead in the 100th minute.

Substitute Ahmed Zizo, who usually makes a fine impact off the bench, released Salah down the right with a threaded pass and the Premier League top scorer got the better of Aguerd before sending the ball across the six-yard box to Trezeguet for an easy tap-in at the far post.

Egypt remained steadfast at the back as Morocco desperately looked for an equaliser, and Salah could have scored his second of the night just before the final whistle.

Bounou joined the rest of his team for a late free kick but Egypt stole possession and broke forward. Ramadan Sobhi tried to find an empty net from almost the halfway line but the ball rolled slowly and Salah barely caught it but could only hit the side netting from a tight angle.

However, it mattered little as Egypt emerged winners from a tough battle to continue their bid for their first Nations Cup title since 2010.