Abeg sponsored the biggest reality TV show in Africa. Now can the one-year-old startup retain the users it pulled in? 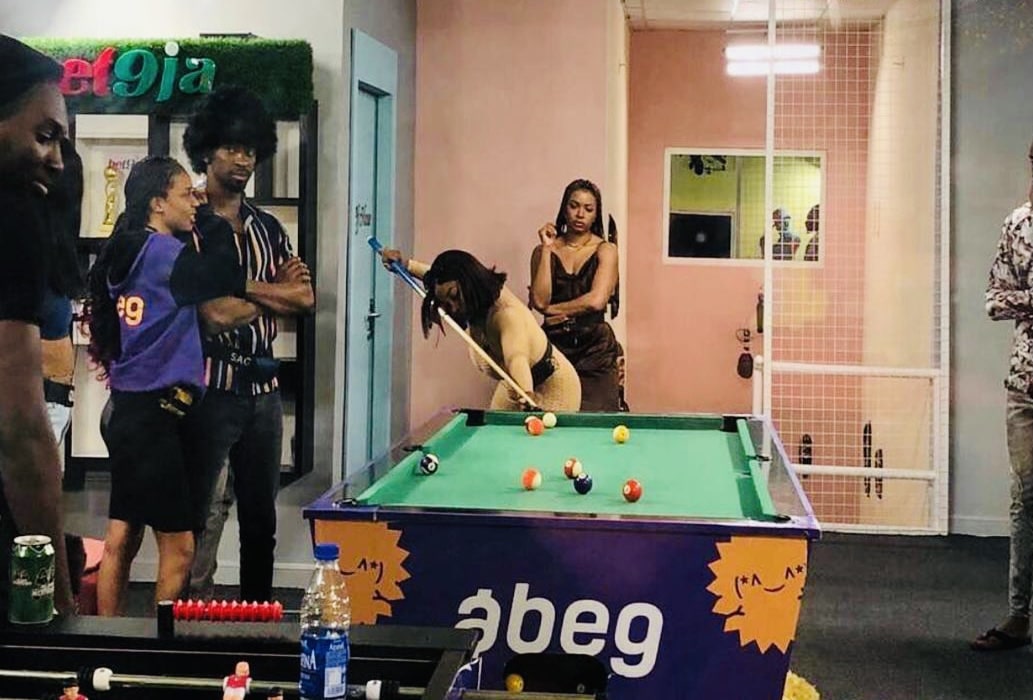 The show, which commenced on July 24, is the most popular and most-watched reality show in Africa, raking in impressive numbers in terms of money and viewership.

The “Big Brother” franchise, started in the Netherlands, has been duplicated worldwide, including Nigeria, where pay-TV company MultiChoice Nigeria organizes it.

It features a group of people who live together in a huge house, detached from the outside world but watched via television cameras.

The recent season of “Big Brother Naija” was the sixth since launching in 2006. In its fifth season, the show’s organizers claimed that viewers cast a whopping 900 million votes.

With millions of eyeballs tuned in to watch the show daily, it is only fitting that companies looking to appear before viewers have to pay a premium. According to some sources, it costs $2 million to become a headline sponsor of the drama show, and Abeg, the latest one, is the newest beneficiary of the kind of blitzscaling growth “BBN” provides.

A new generation fintech app with some drama

Abeg was founded in 2020 by Dare Adekoya, Muheez Akanni, Patricia Adoga and Eniola Ajayi-Bembe. Its name is a wordplay on popular Nigerian slang abeg, which means to ask or beg for something.

The platform launched in September of that year with a Cash App-esque play: By leveraging a wallet-based system, Abeg allows users to request and send money to each other with tags.

But what started as a couple of Gen Zs trying out cool stuff outside Nigeria’s traditional payments space quickly turned into a company looking to scale after gaining 5,000 users in its first few weeks with zero marketing.

And for the next few weeks, Abeg won more users. However, coming into 2021, the hype around the app — especially on Twitter, where it gained fame — died down. To many, it seemed like the app was marching toward a slow death.

So, it came as a surprise when in April, MultiChoice announced the startup as the show’s headline sponsor before the sixth season began months later.

How did the six-month-old startup, which at the time had not disclosed any fundraising and seemed to be struggling, manage to sponsor a show that cost $2 million? That was the question on the lips of many observers. And they came up with some theories.

However, TechCrunch got some answers in a call with the startup’s founders. “Before the Big Brother show, we had already raised a pre-seed round from local investors,” CEO Adekoya said on the call. He said the team used a portion of the undisclosed pre-seed round to sponsor the show.

Prior to this revelation, the answer appeared to be in the fine print of MultiChoice’s announcement back in April, which identified Abeg as “a product of leading financial technological company Piggytech Global Limited.”

Piggytech is the parent company of PiggyVest, Nigeria’s most popular savings app and one of the country’s most valued fintech startups. Multichoice’s announcement suggests that Abeg was acquired by Piggytech even before the show started (according to people familiar with the matter, this happened in late 2020), and some sources say Piggytech paid the “BBN” sponsorship money for Abeg.

Though Abeg CEO dismissed this report, it seems like a more logical assertion because rarely would you see a pre-seed stage startup with a few thousand users raise money and earmark a marketing budget of $2 million only to spend it at one go.

Abeg’s acquisition by its parent company has been shrouded in secrecy. But it has also been glaring for months to many people — particularly Nigerian tech Twitter where the handles of Abeg and PiggyVest regularly exchange banter on the social media app.

Despite this, Piggytech and its subsidiaries have neither publicly refuted nor confirmed their relationship until now. “We [Abeg and PiggyVest] are more or less under the same parent company; so, like sister companies and subsidiaries of Piggytech,” CTO Akanni said in the call.

The relationship has also produced some drama. In August, Nigerian tech Twitter was abuzz about a young startup that regrettably relinquished most of its ownership to a big company. It didn’t take long to know the companies involved. There was more speculation on how this contributed to the ousting of Michael “Trojan” Okoh, the ex-CTO Abeg brought on to build out the app’s first version late last year.

Some sources told me that Okoh left because of ownership dynamics in which Piggytech allegedly bullied its way into acquiring Abeg. TechCrunch reached out to Piggytech and Okoh, but they declined to comment.

On the call with Abeg founders, though, Akanni denied the reports saying, “You can see it as how someone would leave the company usually and unusually. It wasn’t because of a ‘PiggyTech takeover’ — it was because of other reasons we won’t like to disclose.”

Since both camps moved past this drama, Okoh has launched Thepeer, a Nigeria fintech company where he is chief technology officer, while Abeg numbers have boomed courtesy of “BBN.”

The Big Brother impact and what next?

Abeg isn’t the first tech startup to sponsor the reality TV show; other tech companies have done so in the past. They include now-defunct e-commerce company PayPorte; betting companies Betway and Bet9ja; and fintechs Kuda, Patricia and unicorn Flutterwave.

Each of them reported astronomical growth following the season finale.

It was the perfect blueprint for Abeg to copy. And it did, masterfully. Entering into the show with a new design, a relaunched app and over 20,000 users, Abeg claims it now has almost 2 million users.

“‘Big Brother’ is like a large billboard in Africa where brands can … advertise and promote their products. And as Abeg, we are trying to infuse culture, lifestyle into the app, because payments is part of people’s lives,” COO Adoga said.

“So it’s pretty much worked for us because we’re trying to … promote and introduce the brand to the market and [tell] people what we’re about and what Abeg is supposed to be.”

When Abeg launched last year, its best use case for social payments was to let users run giveaway campaigns. Giveaways on the app became more prominent during the Big Brother show as celebrities and influencers (sponsored by Abeg) used the app to send money to their fans.

Relying on such a model is unsustainable. Users enjoyed using the app for giveaways on version 1.0, but it surely wasn’t enough for user retention. Now that Abeg has acquired more users and grown 100x, retention will become more critical than ever in version 2.0.

The Abeg team knows this and is exploring more specific use cases with Piggytech’s backing.

“We went the giveaway route basically to attract a lot of signups, which worked, and for people to reserve their usernames and get around with the app,” Adekoya said. “Moving forward, Abeg will be your go-to payment app for anything you want to pay for.”

That’s why Patronize, also known as “Abeg for businesses” was launched. The platform, another Piggytech subsidiary as confirmed by the company to TechCrunch, is a Square-esque product for Nigerian small and medium businesses to accept payments from customers using the Abeg app.

Like Square, Patronize provides tools to help businesses grow, manage and reward their customers. Unlike Square, however, Patronize is void of cards.

With its own smart point-of-sale devices, Abeg is trying to disrupt POS machines in retail shops and stores and bank transfers.

Granted, these are two tough propositions, but Abeg is right to think there’s opportunity. While fund transfers in Nigeria are instant with the help of the Nigeria Interbank Settlement System (NIBSS) as the infrastructure behind it, failed transactions and downtimes are still common occurrences.

Abeg, with its wallet system, provides a unique channel to make payments which, according to the company, has a 99.9% uptime. Abeg is banking that customers will see it as an alternative when they feel dissatisfied with traditional payments and become the go-to platform to pay for a movie, food, event or drugs from pharmacies.

Will all these be enough to retain users? It’s not entirely certain because one would still need to use the bank transfers to fund an Abeg wallet. And some users I have spoken with about the product don’t see why they should make transfers into their Abeg wallets every time to make payments when they could also transfer money to the recipient’s bank.

These are issues Abeg needs to address to retain its millions of users. One way it plans to do this is via direct integration with PiggyVest so users from the savings app can fund their Abeg wallets.

What’s the play here? So PiggyVest reportedly paid out ₦250 billion (~$500 million) into its users’ bank accounts so far at their last email to them this month. That’s a lot of money. And since an Abeg wallet can perform some functions of a traditional bank account like transfers, bill payments or buying tickets, PiggyVest is telling its users, “why don’t we use your Abeg wallets as your default withdrawal vault instead of your bank accounts.”

Some users will likely find this inconvenient. And sources tell me that Abeg might begin to allow users to earn interest on money sitting in their wallets in a bid to appease them.

With these features, Abeg’s strategy is to leverage the pull and success of its “sister company” to achieve stickiness and, at the same time, bring into fruition the financial ecosystem Piggytech is building to retain float.

Outside that, Abeg is going big on social gatherings, sponsoring entertainment events and musical shows of Grammy-award winning artists such as Wizkid and Burna Boy to acquire more users this upcoming holiday season.

Despite the influx of venture capital into the Nigerian fintech space, the market is crowded with platforms housing comparable features such as buying airtime, paying utility bills, making transfers and savings.

Abeg claims to be different because its users won’t experience slow payments and high transaction costs which exist on other platforms.

Though this pitch remains lost on some people, Piggytech believes Patronize will do the trick in changing their opinions. The business-focused platform is also on a user acquisition spree, onboarding tens and hundreds of merchants with smart POS devices to cater to the millions of users acquired by Abeg.

Biotechnology, AI to determine future of medicine in Tanzania