In what has become a trend, Naira fell to a record low over-the-counter on the last trading day of 2021, closing at N435/$. This came amid uncertainty about the market outlook as the economy wobbles into a new year. 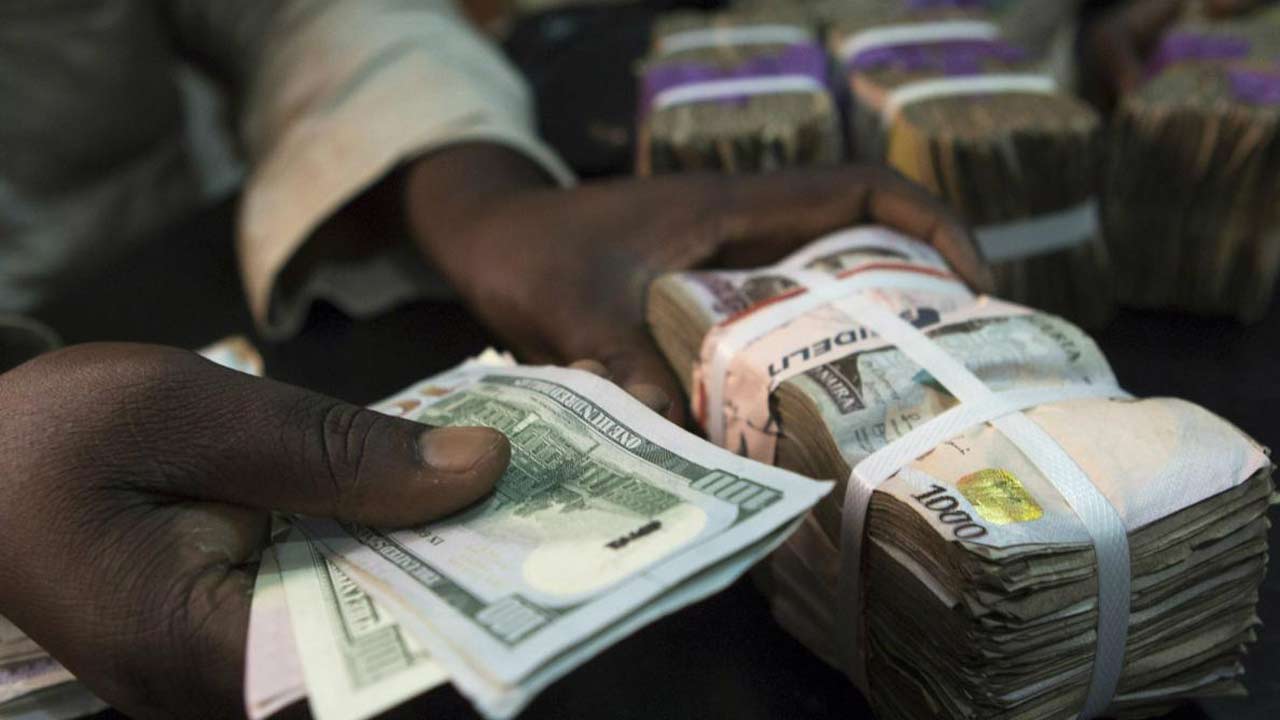 With the closure rate, naira had sold at a discount of over 15 per cent to a dollar at the official Nigerian Autonomous Foreign Exchange (NAFEX) window last year.

Trading opened last year at N410/$ but the exchange rate fell to about N415/$ as the year rolled by, though it also traded at N415/$ after the Christmas holidays, with extremely wide swings, indicating high volatility of the market.

Last Friday, the Naira started trading on an upswing at N420.67/$ but slid to as low as N445.60/$ by mid-day before it appreciated slightly to close at N435/$. The extremely unpredictable trading session saw the currency vacillating between N400/$ and N445.60/$.

The forward market, which measures the perception about the near-to-medium-term outlook of the Naira moved on a much narrower range of between N452.12/$ and N453.12/$.

Naira, however, has been relatively stable at the parallel market, closing the year at N565/$. As at yesterday, the market still traded around N465/$, suggesting the narrowing of the historic wide differential between the official and black market rates. Some experts have attributed the many manipulations (including round-tripping) in the market to the wide gap between the windows.

The dollar traded for about N475/$ in the early days of last year and hit N575/$ at the height of last year’s currency crisis few months ago. There was a breather weeks ago, with the unofficial exchange rate adjusting to N550/$.

Like it has every year since 2014, the Naira finished 2021 weaker than it started. It lost about N90 per dollar or 19 per cent at the highly speculative parallel and six per cent or N25.7 per dollar at the official trading window.

About two years ago, the Central Bank of Nigeria (CBN) had pledged its commitment to rally convergence around NAFEX. Last year, it replaced the default CBN official rate, the benchmark used for government transactions, with NAFEX, but a full rate harmonisation has not been attained.

Yesterday, the Chief Executive Officer of Economic Associates, Dr. Ayo Teriba, said nothing short of “a single exchange rate implementation would help to clear the market and restore equilibrium.”

NAFEX is often touted as the anchor of the planned liberalised market, but in its current formation, it is pseudo-market led as the apex bank regularly intervenes to shore up supply.

A former Assistant Director at the CBN, Stan Ukeje, told The Guardian that the market would need to be deepened with more participants enlisted to reduce the intervention of the apex bank and make it a truly market-driven window.

The recent tumbling of the Naira at the official window is being interpreted differently. Some experts see it as the beginning of a more liberalised market but the Central Bank could not be reached for confirmation. Others said Naira may adjust upwardly in the coming days.

On the last trading day of 2020, there was a similar ‘blip’ as the Naira lost 4.2 per cent on the spot market, widely quoted by foreign investors’ and exporters’ (I & E) window. The naira closed at N410.25/$, which was hailed as the effective take-off of the much-expected convergence. But a few days into 2021, there was an intervention from the monetary authority, an action that helped the local currency to regain lost ground.

Vice-Chairman of Highcap Securities Limited, David Adonri, said the 3.5 per cent depreciation of the Naira in a single trading day reflected dwindling supply and a signal that the illiquidity challenge could enter the new year.

“It means Nigerians will have to brace up. The challenges are not yet over. That depreciation underscores the precarious state of the market,” Adonri noted.

The monetary authority made frantic efforts to shore up the supply of FX last year and contain anti-market activities. The Naira-4-Dollar Scheme, a policy that sought to increase remittances through official channels, was created as a follow-up to other reforms in the money transfer market that started in 2020.

The eventful year also saw the apex bank withdrawing the weekly funding of bureau de change (BDCs) operators and handing over business/personal travel allowance (B/PTA) dollar sales to commercial banks. The efforts, notwithstanding, the crisis in the FX market has continued.

MEANWHILE, the Association of Bureau De Change Operators of Nigeria (ABCON), the umbrella body for over 53,000 CBN-licensed BDCs has advised the apex bank to de-risk operations of their members to allow them to access forex from the autonomous market.

In a statement at the weekend, ABCON President, Dr. Aminu Gwadabe, said the BDC sub-sector is becoming comatose since the July 2021 Monetary Policy Committee (MPC) meeting where the CBN suspended weekly dollar interventions to BDCs.

He said that while BDCs are licensed to offer retail forex sales, across the counter forex transactions, they equally contribute to economic development.

According to Gwadabe, over N1 trillion annual transaction volume by the BDCs sector is under threat while huge capital investment in the sector is becoming redundant and gradually being eroded.

He, therefore, advised that just like the apex bank de-risked the agricultural sector, making it easier for agriculturalists to access cheaper loans at a single-digit interest rate from banks, the CBN can also de-risk the BDCs operations to be able to receive diaspora remittances through the international money supply operators (IMTOs) and deepen foreign capital flows to the economy.

He suggested that the BDCs should be allowed to access diaspora remittances through the autonomous forex window. They could access IMTO proceeds, carry out online dollar operations and operate point of sale (PoS) agencies to enable them to contribute to economic growth, he said.

“The recognition of the role of BDCs in Nigeria’s financial sector remains the first step to building a sustainable and viable forex market that is comparable to what is obtained in other economies. But getting the Nigerian BDC sector to where it should be demands hard work, quality leadership, regulatory foresight and sound government policies,” Gwadabe said.

A professor of applied economics, Godwin Owoh, had previously warned that the expected intra and inter-party campaigns ahead of the 2023 general elections would exacerbate the financial stress index and compound the monetary regulation challenges.

He said the appetite of politicians for the greenback would increase demand for FX and put more pressure on the naira. He charged Nigerians to prepare for harder times, stressing that the odds do not favour a stable FX market this year.

“There has not been stability in the past six or seven years. The political campaign will only add to the challenge. I don’t think Nigerians should expect anything better than they have seen in the past years. What we have now is a baseline that will incrementally get worse as we progress into 2022 and 2023.

“Again, change of government may not make much difference because whoever will emerge will need to negotiate and accept the status quo. It does not matter if the person is from the South or North. So, Nigeria will have to be in trouble for more than eight years,” the professor warned.

Also speaking, Victor Ogiemwonyi, a retired investment banker, said reforms are important to stabilising the market, adding that overreliance on importation was a major challenge the country would need to deal with. He added that “every year before the general election heightens uncertainty.

“People don’t know what is going to happen. We have no idea who is likely to succeed the current President. So, there will be more capital flight. A lot of people will begin to divest and take their resources out of the country. There is no way these will not have a negative impact,” Ogiemwonyi noted, adding that long-term policies will advance the cause of economic development better than haphazard decisions.

But a member of the Monetary Policy Committee (MPC) and professor of economics at the University of Ibadan, Adeola Adenikinju, has a different perspective about the impact of politics on the FX market.

He admitted that demand for FX would increase but also noted that many politicians would also bring hard currencies for spending.

When that happens, the professor argued, the increase in demand would be balanced out with fresh injection into the system.

He said events of previous election years proved that FX liquidity could increase as a result of political spending.