Jada Pinkett Smith has opened up about her hair loss (alopecia) after years of treatment with steroids. 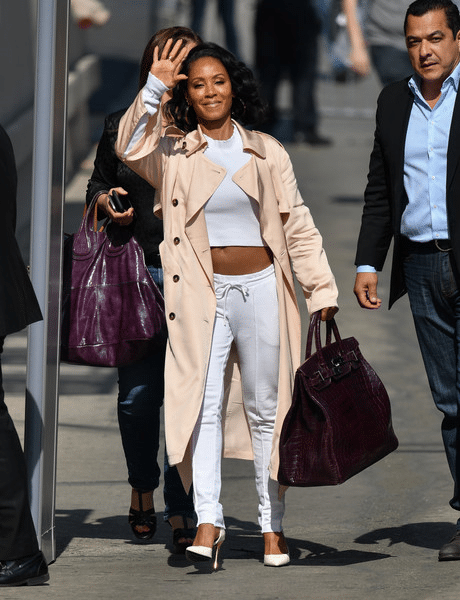 The “Red Table Talk” host says that she has finally come to accept it. In a video she posted to Instagram, she revealed to her followers an up-close look at her scalp showing the bare patches that come with her alopecia. And in true Pinkett Smith fashion — anyone who’s watched a Red Table Talk sit-down can attest to her no-nonsense attitude to just about everything — she told everyone that now that it has gotten past the point of hiding and she accepts it for what it is.

“Now at this point, I can only laugh,” Pinkett Smith said as she showed close-ups of her bare spots. “Y’all know I’ve been struggling with alopecia and just all of a sudden one day, look at this line right here. Look at that.”

“So it just showed up like that and this is going to be a little bit more difficult for me to hide,” she continued. “So I thought I’d just share it so y’all are not asking any questions. But you know mama’s going to put some rhinestones in there. I’m going to make me a little crown. That’s what mama’s going to do.”

She also pointed out that why she opened up about her alopecia was to address any questions about her health before rumours start to rise.

“Mama’s gonna have to take it down to the scalp so nobody thinks she got brain surgery or something 😜,” she captioned the video. “Me and this alopecia are going to be friends … period! 😆”

In July, Pinkett Smith shaved her head, by finding inspiration from her daughter Willow.

“Willow made me do it because it was time to let go,” she captioned the debut. During an episode of RTT, Pinkett Smith said that she was shocked when the alopecia presented itself, saying that it happened in the shower and that it was terrifying.

“It was terrifying when it first started,” she said. “I was in the shower one day and had just handfuls of hair in my hands and I was just like, ‘Oh my god, am I going bald?’”
At the time, she said that she would seek help with the alopecia, but now, years later, it looks like she’s happy with how everything turned out — and happy to share her experience.

Alopecia areata, as it is known by, is an autoimmune disorder that causes your hair to fall out, often in clumps the size and shape of a quarter. It is genetically passed on and people are more likely to get alopecia areata if: a family member has it, they have Asthma, Down syndrome, Pernicious anaemia, Seasonal allergies, Thyroid disease and Vitiligo. Alopecia areata has no cure. However, it can be treated and hair can grow back.

Ivory Coast is set to receive $26.1 billion worth of development finance from 4 lenders, the EU and France